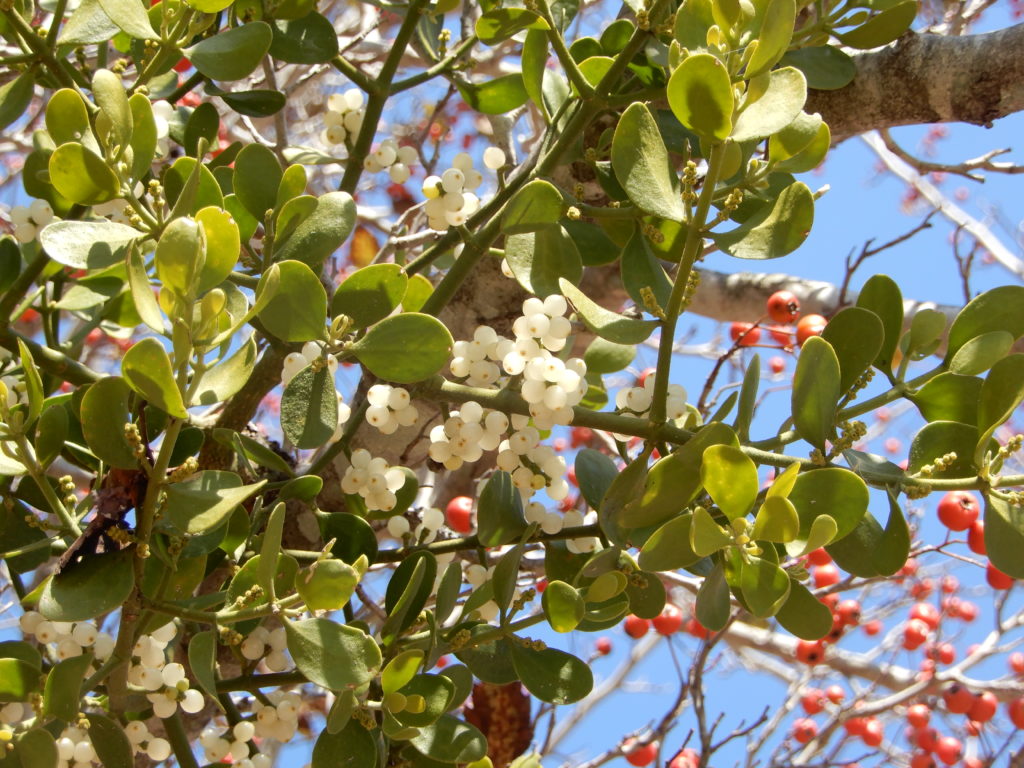 The custom began nearly 1000 years ago in Norse mythology, and because of it we tend to make light of an insidious problem for our trees!

The myth: there once was a man named Odin who was married to a woman named Frigg. Together they had a son, Baldur. Frigg loved Baldur very much and was most distressed when she found out that it was prophesied that he would die. In her desperation, Frigg went to all the plants and animals in the natural world and had them vow not to harm Baldur. However, in her haste she failed to obtain a vow from one particular plant. The antagonist in the story, the evil god Loki, learned of the oversight and made an arrow from that plant and killed the otherwise invincible Baldur. The plant that killed him? Mistletoe! According to one version of the myth, the gods were able to resurrect Baldur from the dead. Frigg was filled with joy and declared Mistletoe a symbol of love, vowing to plant a kiss on anyone who passed under it. By the 18th Century, Mistletoe had become widely incorporated into the celebrations of Christmas. Young girls would stand beneath a sprig of the plant, inviting daring young suitors to steal a kiss from them.

The dark side: For all the Christmas revelry and romance attributed to Mistletoe, there is a dark side to this plant that causes death and devastation. Mistletoe (the plant common to our area is Phoradendron serotinum) is a parasitic plant, extremely well evolved to pray upon, and kill, many species of trees. The name of this group of plants comes from the Old English word misteltan, meaning “bird droppings” and “twig”– 2 clues to phenomenal adaptations of this plant to its parasitic nature.

The Mistletoe that we see in our area, while a native plant, has its origins in the northwest Amazon basin: it is actually a tropical plant. Amazingly, it has migrated all the way to our region over the millennia, but the range does not extend any farther north than Georgia at the present time. It is a hemiparasite, meaning that while it does steal water and nutrients from the trees on which it grows, it also has leaves that contain chlorophyll and can therefore photosynthesize its own food. The plant is also a true angiosperm, producing flowers and fruits. Mistletoe flowers from mid-September to late-November and produces fruit from November through March, so often those sprigs hanging around at Christmastime will be adorned with clusters of little white berries.

Equipped to kill. One might wonder how those evergreen clumps of Mistletoe get so high up in the branches of the trees? The secret is inside those little white berries, for they contain many sticky seeds. Mistletoe berries are a favorite food of many birds. As the seeds are eliminated from the bird, their sticky composition (viscin is the sticky substance) allows them to adhere to a branch on which they land, and the bird provides a shot of fertilizer at the same time. This is the answer to the first clue from the English word misteltan. The seeds germinate quickly, but no leaves are formed until the second year. Now for the deadly part of this killer: while the leaves that form will feed the top of the plant (the ectophyte), the base of the plant forms a foot-like structure called a haustorium, which generates strands that enter the phloem to steal nutrients from the tree, and sinkers that invade the ray cells of the xylem to steal water. The haustoria with their strands and sinkers form the parasitic endophyte portion of the plant. The photos here show the foliage, berries, and haustoria of the Mistletoe plant.

Trees have an amazing way of compartmentalizing wounds to protect the rest of the plant and prevent secondary infestations from insects and disease. They essentially “seal off” affected areas from the remaining undamaged portion of the tree. One might therefore conclude that trees could do the same when attacked by Mistletoe. Not so! Once the foot-like haustoria get under the bark, growth regulators called cytokinins are injected into the vascular system through those strands and sinkers. These growth hormones perform the task of telling the tree that the Mistletoe is not really Mistletoe – “I am just another branch on the tree!” Here, therefore, is the answer to the second misteltan clue. The tree responds by funneling water and nutrients to the Mistletoe – at the expense of the adjacent branch, which eventually withers and dies. As the infestation on the tree worsens, the entire tree may be lost.

Devastation and death. Mistletoe attacks 105 species of trees in the United States. It is amazing that a parasite that produces 98% of its own food can destroy a tree the way Mistletoe does, but the plant has no means of obtaining water and nutrients except by way of the host plant. And in the true form of a parasite, Mistletoe will only die when the host does. Mistletoe most often attacks twigs and branches ½ to ¾ inches in diameter, though heavy infestations can lead to the attack of much larger ones. In a year such as 2019 in which we have seen not 1, but 2 periods of extreme drought, it is alarming to know that even a moderate infestation of Mistletoe makes drought stress on a tree 25-30% worse.

Management & mitigation: Mistletoe is a difficult parasite to manage. Physical removal by pruning highly infested branches is arguably the best management practice where the aesthetics and health of the tree is not compromised by excessive pruning. Physical removal is another method, though breaking the plants off the branches only results in about 20% control: 80% of the plants will regenerate from the haustoria in the bark of the tree in 1-3 years. Chemical management is also possible, but must be carefully done and is not often practical during certain times of year or in high-traffic areas. The tree in the photos shows a fairly heavy Mistletoe infestation both before and after pruning of infested limbs and removal of plants. Not really an effective control method, but interesting to note nonetheless that the Great Blue Hairstreak butterfly is wholly dependent upon Mistletoe for its survival. Further, the Hickory Horned Devil moth will eat the foliage of the plant.

What began as story in Norse mythology and grew into a tradition of kissing at Christmastime has masked and made rather light of a serious pest of the trees in our forests and gardens. This Christmas, when that sprig of Mistletoe hanging over the doorway allows you to steal that kiss from one you love, remember that there is a Mistletoe menace high up in the branches outside: that sprig may be for that tree – the kiss of death!

Contact Downey Trees to evaluate the trees on your property for Mistletoe management.

Thanks to Dr. Kim Coder, Professor at the University of Georgia Warnell School of Forestry, for much of the information presented in this blog.