The Downey Trees blog is often upbeat and entertaining; this is not such a post. So often we are called out to look at Leyland Cypress trees that are having problems, and we know what we are going to find in most cases before we get there. Sharing the bad news is the worst part, but before we go there, let’s talk for just a minute about how we got here.

The Leyland Cypress (Cupressocyparis leylandii) was developed in England in 1888. The tree is a hybrid of the Monterey Cypress (Cupressus macrocarpa) and the Alaska or Nootka Cypress (Cupressus nootkatensis). The natural range of these 2 native North American plants is separated by 400 miles, but both plants were growing in close proximity at the Leighton Hall Estate, at one time owned by a Liverpool banker by name of Christopher Leyland. The genus Cupressocyparis arises from some controversy over the generic origin of the Nootka Cypress as some taxonomists classify it under the genus Chamaecyparis. That would imply that the Leyland Cypress is bigeneric cross, a very rare occurrence in conifers.

The modern popularity and widespread use of the plant began in the 1950’s, and by the 1980’s use of the Leyland Cypress was widespread. It is fast-growing, evergreen, strikingly beautiful in form and color, and adaptable to many situations. Like so many plants introduced before and since that are touted as the “perfect landscape plant,” the Leyland Cypress has fallen from grace. In the 1960’s, that perfect plant was the Red Tip Photinia. In the 1970’s, it was the Bradford Pear. So the Leyland Cypress was planted – everywhere! For decades it became one of the go-to plants for hedges, screens and specimens, and is still planted for these purposes. Despite the fact that the tree can grow 20 feet wide and 70-100 feet tall, many became hedges with a planted spacing of 5 feet or less. The trees grow quickly and provide privacy for individual homes on increasingly smaller lots.

Then the problems started. Being a cone-bearing plant with a Mediterranean cross Northern Temperate Cloud Forest heritage,the Leyland Cypress prefers moderate temperatures and soils that are airy and drain quickly, and on the moist side but never saturated and never bone-dry. Georgia conditions are precisely counter to this. Our air is damp with humidity, our high clay-content soils hold water, drain poorly, and exclude oxygen from the pore spaces in the soil. Not only that, while Georgia normally gets a robust 48-52 inches of rainfall per year, the distribution is anything but even: during the late summer and fall of 2016, we went well over 3 months with no rainfall whatsoever. Conversely, as of September 30, 2018 we have had 46.18 inches of rainfall – nearly 8 inches above average for this time of year. These contrary conditions and vast swings in soil moisture, coupled with the fact that the plant’s popularity has rendered it nearly a monoculture in close urban plantings, has made these plants susceptible to disease issues. Add to this the specter of broken branches from winter ice and summer thunderstorms, the diseases can spread rapidly.

There are 2 primary fungal pathogens that attack Leyland Cypress trees in the Southeast, Seiridium Canker and Botryosphaera (Bot) Canker. The symptoms of both of these fungal pathogens are the yellowing or browning of the foliage on one or many of the top or lateral branches. This telltale “dieback” is what we have all become so painfully familiar with. A closer look at the branches and main stem may reveal beads or runny areas of amber-colored sap oozing from the wood (Seiridium) or cankers, sunken areas girdling the base of dead shoots or branches (Bot canker). Unfortunately, there are no effective chemical treatments for the management of these diseases. While the spread of these fungi cannot be stopped, it can be slowed through some of the following management practices:

Thinking long-term, plan to replace Leyland Cypress trees with something else, perhaps even a diverse selection of evergreens. A possible exception to this may be that situation described above where one plant would satisfy the screening needs for a particular view. A single plant located in such a situation may receive the light, air movement, and isolation needed to provide a healthy growing situation, provided the other needs outlined above are met as well. Avoiding the past history of cultural mistakes with Leyland Cypress and other conifers may help you avoid the heartbreak that has become so commonly associated with this tree. Refer to the links below for additional information: 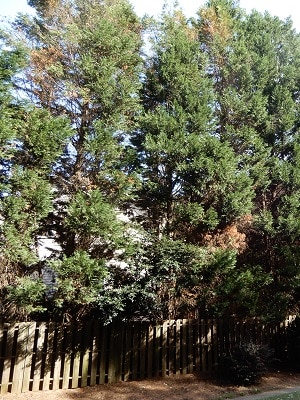 Descriptions of the above photos, starting with the top row and moving left to right: